A home’s true success depends on the use that its inhabitants make of it. It should be functional (i.e. conceived to meet the needs of its users), reflect a certain visual style and be able to blend into the background setting as effectively as possible. Spain has leading architects who specialize in this kind of building...

A home’s true success depends on the use that its inhabitants make of it. It should be functional (i.e. conceived to meet the needs of its users), reflect a certain visual style and be able to blend into the background setting as effectively as possible.
Spain has leading architects who specialize in this kind of building and L’Antic Colonial has been fortunate to collaborate in some of these projects through the use of its natural materials.

Casa Sardinera by Ramón Esteve Estudio
Set on a cliff top on the Costa Blanca (in Jávea, Alicante), this striking villa, designed by Ramón Esteve, stands out for its expressive use of materials, with strongly textured finishes. Due to its location, with panoramic sea views, big concrete walls were built, facing in different directions, with big projecting sections set between walls instead of resting on them.
Paradise Lake Stone Blanco mosaic tiles by L’Antic Colonial were used on the bottom of one of the pools, while Calgary Classico BPT limestone was chosen for the countertops and washbasins of all the bathrooms in the home. RAL-1013-coloured Krion® solid surface countertops were used in the kitchen and for the barbecue.

Casa del Acantilado by Fran Silvestre Arquitectos
Situated on a steeply sloping plot of land, this villa is firmly anchored to the rock of a cliff, with a horizontal platform on which the house itself has been built. It stands out for the three-dimensional layout of its different levels and concrete slabs, conceived to fit in with the topography, together with a swimming pool on a lower level.
The house is clad almost entirely in L’Antic Colonial natural stone, more specifically using Blanco Athenas Sand Home BIOprot and Blanco Thassos Pulido BIOprot marble, both made specially to order.
Photographer: Fernando Alda

Casa BF by OAB
Carlos Ferrater’s studio, OAB, and ADI Arquitectura were responsible for designing this villa in Borriol (Castellón). In order to reduce its impact on the landscape, the home stands on 3 V-shaped double metal pillars so that no trees had to be felled or hillside terraces demolished. The villa is entered from a courtyard in the middle, around which the rooms – all with sunlight – are arranged. This is the very heart of the building, acting as a nexus for its different rooms even though it is not actually on the same level. Hence instead of helping to enclose the building, it slopes away under it.
Baia Stone Negro and Moon Mix Browns mosaic tiles and the Bhuda Blanco Atenas BIOprot washbasin by L’Antic Colonial were used for the home. In addition, Ethnic 1L Merbeau Kenya Oscuro parquet was chosen for most of the flooring, together with Albero Pulido BIOprot travertine stone in the bathroom, both made specially to order.
Photographer: Joan Guillamat

Casa Flotante VV Bolnuevo  by MUHER
Designed on two different levels, this home by MUHER was adapted to fit in with the terrain of a plot of land with all kinds of limitations, set on a cliff top. The entrance to the house is on the top level, reached via a series of staggered terraces, while the communal areas (the kitchen, living room and swimming pool) are all in the middle part. The bedrooms are on the bottom level, much like a yacht. Thanks to the glass walls through which the bottom of one of the pools can be seen, the effect of a house submerged in water is achieved.
Outside, Styledeck Plus decking by L’Antic Colonial was used for all terrace areas, while a Buddha Negro Marquina washbasin was chosen as a sculptural feature for the spacious living room.
Photographer: Juan de la Cruz

Casa Balint by Fran Silvestre Arquitectos
Fran Silvestre has managed to achieve the element of surprise once again with this new project, where priority has been given to oval lines. Light and its effect on all the home’s white surfaces play a starring role in this unusual modern home. Inside, the house is designed on three levels, with a central skylight. The living room, kitchen and bathroom are all on the middle floor, with the bedrooms above them. The outside area is particularly striking, with an extensive use of Silver Touch granite by L’Antic Colonial (made specially to order), interplay between the granite and the building’s oval silhouette, and an eye-catching half-moon-shaped pool lined with World Blanco Almería natural stone mosaics.
Materials by Porcelanosa Grupo were also used on the indoor floors, with 42×50 Eden Sand Soft and Wood Lovers Soft parquet flooring (both made specially to order), while in the bathrooms Blanco Athenas Pulido marble in a special format and an Essence shower tray of the same material in a Classico finish were used.
Photographer: Diego Opazo 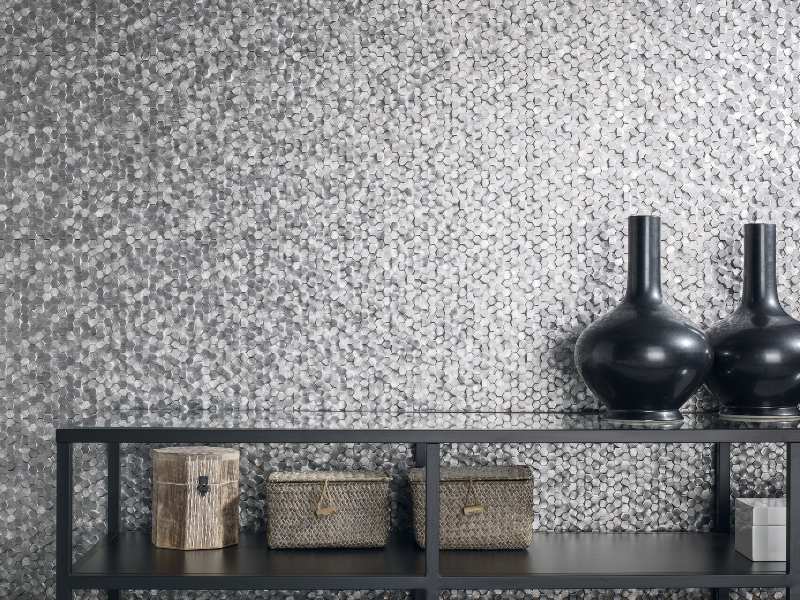